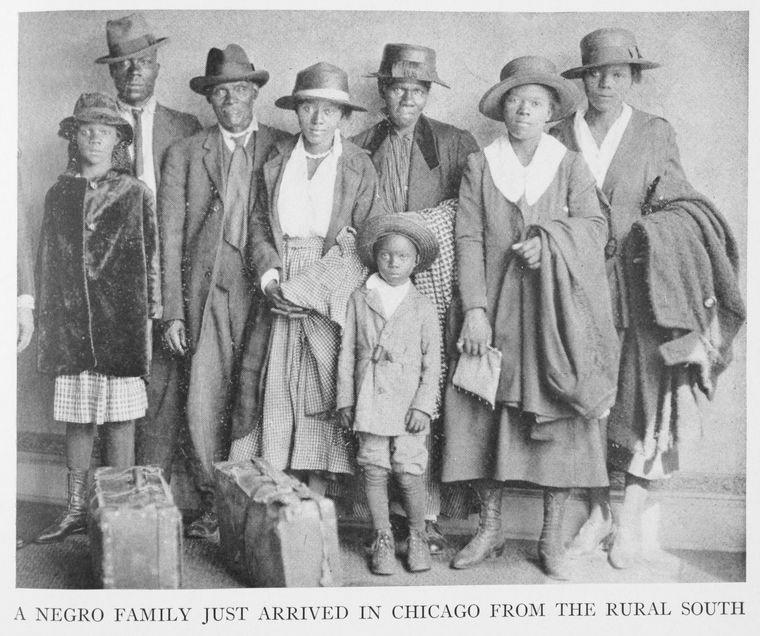 Between 1915 and 1918 roughly a half million African Americans left the South, followed by another 700,000 in the 1920s. Southern blacks living on the eastern seaboard most likely ended up in northern cities on the East Coast like Boston, New York, Philadelphia, and Pittsburgh. Those from the westernmost states of the South often chose to migrate to Midwestern cities like Chicago, Cleveland and Detroit. So many black Alabamans moved to Cleveland that the black community of the city was nicknamed “Alabama North.” More than half of the total number of migrants settled in five cities: Cleveland, Chicago, Detroit, New York, and Pittsburgh. Chicago was, in many respects, the capital city of black migration; by 1935, 250,000 African American migrated to the Windy City alone.

As recent scholarship suggests, the First Great Migration that witnessed the exodus of more than one million African Americans out of the South before, during, and after World War I was a crucial period of black activism. The causes of the movement have been the subject of much debate among historians both then and now. Indeed, Carter G. Woodson famously asked, in 1918, at the height of migration, “What then is the cause?” Woodson cautioned that the migrants themselves offered the best explanations. Despite Woodson’s admonishment, early studies of the migration, including Clair Drake and Horace Cayton’s Black Metropolis, focused primarily on economic factors. Certainly, economics played an important role in the Great Migration, but it was far from the only factor. Given the lack of social justice and the legacy of racialized violence in the South, it is clear African Americans were motivated to leave the South on several fronts.

A more complete analysis of the Great Migration appeared in the late 1980s. In Land of Hope: Chicago, Black Southerners, and the Great Migration, James R. Grossman points to the tradition within African American communities of mobility as an assertion of agency. Following emancipation, Grossman contends, blacks found spatial mobility to be of the utmost significance. Furthermore, Grossman asserts that a grass-roots network of information and leadership emerged that was essential to the movement. In addition, he contends that such a movement developed despite the opposition of traditional middle-class black leaders. A key component of this grass-roots network was the Chicago Defender. Chicago migrant, Robert S. Abbott, founded the Defender in 1905. Abbott’s newspaper quickly developed a popular appeal to African Americans of both middle and working-class backgrounds. By 1916, it was the largest selling black daily in the country.

The narrative of the jazz musician shares several characteristics with the larger Great Migration story. Like their migratory counterparts, musicians left the South during this period for a variety of reasons. However, the migration of jazz musicians is often explained primarily in economic terms. To be certain, economic opportunities were a significant contributing factor for musicians journeying north. However, just as is the case with broader interpretations of the Great Migration, the primary focus on economic motives diminishes the agency of jazz musicians. Indeed, jazz musicians have a history of grass-roots networking with colleagues to find work. The link between southern musicians and their counterparts in the North during this period is no exception. Furthermore, the wide circulation of the Chicago Defender across the South indicates its availability to musicians as well. The trumpet player Adolphus “Doc” Cheatham confirmed as much in a 1976 interview saying, “We thought that was a great paper…. Chicago Defender really gave you all the news of the entertainment in Chicago at that time.” Cheatham believed the city’s white papers had no interest in writing about the achievements of African Americans. Therefore, he “only read the Chicago Defender.” In 1928 the cornetist Emmanuel Perez wrote Dave Peyton, the Defender’s music columnist, to let Peyton know Perez looked forward each week for the paper to arrive. In the pages of the daily, musicians could read about the scores of cabarets and the burgeoning nightlife in the South Side. For instance, a 1914 article in the Defender promoted the virtues of the South Side entertainment district known as the Stroll:

At night it changes to the sublime. The street is ablaze with light, the sidewalks are            crowded and there is music and laughter everywhere. Nearly every block has a                  theater or two and together with the buffets, with their entertainment of singing                and dancing, the Midway is outdone…. Until the police curfew rings at 1 o’clock the            pleasure bent populace enjoys life to the extent of their pocketbooks.

These considerations suggest that a deeper analysis is needed to fully understand why musicians came north. Therefore, the advice of Carter G. Woodson is most apt. By examining the reasons musicians gave for coming to Chicago we can best ascertain their motivations.

The jazz exodus became possible only after a number of individuals assumed a critical leadership role by encouraging fellow musicians to leave the South altogether. For example, trumpeter Natty Dominique left New Orleans a few years before the closing of Storyville in 1917 to work as a cigar maker. Dominique had a job lined up before he left, thanks to a friend named Casino. “He said you want to come to Chicago?” Dominique recalled. “I said, all right, I’ll get ready. I got ready too, had my clothes, had my trumpet, and I got to Chicago.” Dominique’s oral history indicates that he left New Orleans because of economic considerations, but he made the decision to leave based on the advice of a friend. Dominique utilized the same kind of grass-roots support as dozens of other musicians in his journey to the Windy City. Like Jelly Roll Morton, Sidney Bechet, Paul Barbarin, and the members of the members of the Creole Jazz Band, Dominique left New Orleans before the closing of Storyville. The traditional interpretation holds that musicians left New Orleans en masse after Storyville closed in 1917, because there was no longer work for musicians in New Orleans. But, that interpretation does not take into account the experiences of these important individuals. Therefore, economic considerations, though important, were only one factor among many.

While jazz was a central cultural component of life in Harlem, it was also crucial to scores of cities across the country, like New Orleans, Kansas City and Chicago, as African Americans journeyed north during the Great Migration.